Steve Clement, General Manager of Sage Fruits, Yakima Valley of Washington State, found himself part of a management team in 2008 who were looking at drafting a strategic plan for the four separate companies that are the warehousing and distribution system that makes up Sage Fruit. At that time, they were introduced to Legacy Business Cultures through a local consultant, Suzanne Hoonan.  She began working with the team on their goals and the strategic vision of what Sage Fruit should and could look like in the years to come.

“How do we build a common culture and align the companies?”, they asked themselves.

Alignment meant understanding the perceptions both internally and externally, aligned points of view from all contributors and aligning processes with the separate owner warehouses. They quickly realized that the owner operators and workers of each of the separate companies are just as dedicated and devoted as the next.  So the questions remained for the strategic planning; how do we align interests and common goals?  How do we share the responsibility and accountability of building an effective communications channel within the companies? All while trying to set themselves apart from the competition through their unique structure.  The leadership also realized that their approach to this change was all about their attitude, and how they approach daily issues was an important realization.  There are factors in the market that are out of their control and they would need to let go of and focus on the factors they could make a direct impact on.  Through their consultations with Suzanne Hoonan, it was determined that she had a curriculum in hand that aligned very well with the strategic goals they were mapping out for improving processes, improving communication and changing the company’s culture; Increasing Human Effectiveness™.

The management team began to implement Increasing Human Effectiveness™ with the management at each of the owner warehouses.  These leaders continued to contribute to the strategic plan and identify gaps and areas for improvement. One such area noted was how Sales and QC behaviors had a negative impact on the warehouse and dock. “Everything that could go wrong upstream comes to a head at the shipping docks.  We have to fix that!” notes Steve Clement.

They introduced the idea of blind spots and began to set common goals and align resources to get there.  They brought together cross functional teams to solve everyday logistics and communications issues.  In a very significant move, they flipped their focus and point of view to those around them, embracing that others are going through the same process right alongside of them and can be relied on as a resource.

“Who is my customer [internal/external] and what do they need from me?”

Common goals became the norm and finding the right resources the first line of resolution. Now, no journey is perfect and there were certainly bumps along the way.  As an example, gaps were noted in closing the pools of orders from the last packed date;  a significant item to be resolved, since it impacted suppliers, customers and the revenue flow of the business.  Steve Clement brought the management team together and said “We’re going to set a goal to close 50% of the pools within 90 days of the last packed date, and 100% at 120 days.”  This statement was met with its first wave of criticism of course.

“Steve, we appreciate that, but it’s never been done, it’s not going to work. This group won’t work together”.  Steve affirmed his belief that it is going to work because we’ve established better lines of communication, share a common goal and everybody cares!

Steve Clement proudly shares that not only was the goal met, but it was met within the first year of implementation and subsequently shared at that year’s annual leadership event.

Steve believes the Increasing Human Effectiveness™ curriculum has made measureable impact on Sage Fruit as a business as well as the human capital side of the business.  First he notes that they have grown by leaps and bounds. Sage Fruit has outgrown the industry growth of 25% and gained market share with 46% growth from 2013-2014. That kind of growth will show the stress fractures of any organization as they navigate the bumps in the road all growing companies encounter.

However, Steve feels that they are dealing with those bumps in the road much more effectively now.  “I say that’s a direct result of IHE”.

The company also uses scorecards to gauge improvement.  Each department sets annual goals to measure against, usually related to resources or productivity.  However, Steve feels that the best ROI he sees is in the people of the organization and shares that through a couple of very telling stories.  He shares a story of one of their shipping contacts.  Known as harsh, a screamer highly frustrated with the company processes and those around her.  Steve wanted to use her daily experience as one of the driving factors for why the IHE process would work. They introduced the principles and processes to what was considered by some to be a highly dysfunctional team.  Setting their sights on common goals once again and backing it with a plan and the resources of cross functional teams to get things accomplished.  The indicator that something was different came to light though the truckers that reported to the shipping docks and fulfilled customer requests.  “What happened to you?” They would ask the shipping contact. “What do you mean?” She would reply.  We’ve been loading trucks here for 20 years and have never seen you this happy!  “That’s the ROI,” Steve emphasizes.  There are too many factors to put a number on that.

“Great service starts on the inside and works its way out,” a quote from Bob Moawad, became almost a personal mission statement for this individual.

She became the shipping goal leader and presented company achievements to the leadership team going forward.  “For the first time I have hope and I want to be part of it.”

Steve also shares a simple moment with a line supervisor who was originally a naysayer of the IHE curriculum.  The supervisor pulls Steve aside to say thank you!  “You don’t know what it’s like feeling that whenever something goes wrong; someone is out to get you. Now, I feel good about pulling people together to get the job done.”  Steve comments, “ I don’t know how that can’t translate into better service for our customers.”

Now, several years later, new employees who have direct reports go through Increasing Human Effectiveness™ training as part of the new hire process.  In the sales office the traditional annual performance review process has been replaced with a model of performance and continuous improvement for the individuals.

Are your leaders and employees prepared for an uncertain business climate?

Learn the the skills, knowledge and attitudes to thrive in any situation with Increasing Human Effectiveness, the world’s best individually-focused adaptability and change management program — now online! 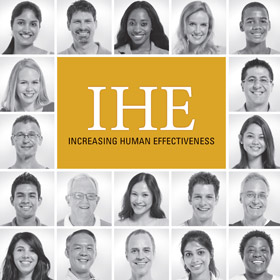