The Road to Inclusion Starts with Respect

Sometimes, we humans have a tendency to make things more difficult for ourselves than necessary. We overthink, over-analyze and generally over-complicate the process of solving problems that have simple solutions. That said, simple does not mean easy. In fact, the simpler and more straightforward a solution, oftentimes the greater the mental and behavioral inertia is that has to be overcome.

Such is the case of pursuing truly inclusive societies and workplaces. I’m not going to belabor arguing the value proposition for why this challenge is so important because most readers already understand it instinctively. Since our earliest days as a species, humans have relied upon inclusion in communities and tribes for our very survival. Compared to other animals, we are relatively small, slow, weak and vulnerable on our own. But include us in a community where we have the support of each other, and we are almost unstoppable. Except, of course, by other groups in competition with us. And therein lies the true barrier to inclusive cultures: an antiquated mindset of what “we” and “us” really means.

Despite the current surge in tribalism (nationalism), whose proponents are attempting to reinforce divisive social frameworks based upon nationality, skin color, sexual orientation and religious beliefs, we are truly a global community now.  Our food supplies and medicines flow across national borders in all directions. The raw materials needed for manufacturing are traded and shipped to and from all points on the globe. New ideas and important information can be shared half a world away with almost anyone in literally the blink of an eye. Even more impressive, we can talk with or video chat with almost anyone who has a mobile phone…anywhere. This is the world we have created and, like it or not, we need each other more today than we ever have in our history. In fact, I would argue that this global interconnectivity and interdependence is significantly at the heart at what keeps most nations from going to war with each other. We are all more efficient and prosperous working together, which is a very good thing.

If we’re so interdependent now, then why aren’t we automatically more inclusive? Because our brains are slow to change. Even with a global infrastructure of connectivity firmly in place (and getting stronger), the researcher in me knows that, biologically, we are still hardwired to focus on differences and quickly spot “the other.” Without even trying, our brains quickly scan, label, evaluate and judge others based upon skin color, language, gender, age, physical appearance, dress and just about any other difference our senses can detect. Ironically, while this capacity to differentiate was crucial to keeping us safe (and possibly dominant) in a non-connected world, it does just the opposite now that we’re connected.

The good news is that that there is a relatively simple (not saying easy) process we can all commit to in order to become more inclusive and cultivate our sense of “us” and “we.” In a word, it’s RESPECT. That is, as long as we can agree on the definition. In 2014, I published my second book, The Respect Effect: Using the Science of Neuroleadership to Inspire a More Loyal and Productive Workplace. In it, I defined Respect the following way:

Respect is an active process of non-judgmentally engaging people from all backgrounds with the intent to increase my awareness and effectiveness. It is demonstrated in a manner that esteems both myself and those (others) with whom I interact.

As a catalyst for inclusion, this definition and framework is powerful for two reasons. First, the impact of Respect is almost universally positive and predictable for recipients. To each of us, Respect feels good to receive. In fact, it is the conveyance of esteem and value from one person to another that is the primary trigger for feeling included. So Respect can be practiced relatively easily by doing things in the presence of others that make them feel valued, connected, worthy, safe and important to the community they want to be a part of.

Secondly, this framework is brain-friendly.  It would be foolish to think that we can simply will ourselves to stop noticing differences between people. Not only can we not do this, but we should not either. Our individuality is a sacred part of who we are and a vital ingredient to what we can offer others. What we can do, then, is rewire our mindset. With intention and effort, we can teach ourselves to suspend the antiquated lens of suspicion through which we view each other’s differences and replace it with curiosity. Suspicion triggers wariness, prompts us to be avoid differences and behave in ways that protect ourselves, regardless of the impact on others.  Curiosity, on the other hand, encourages us to explore each other’s differences, honor the uniqueness, find the common ground and then see how we can work together for the mutual benefit of “us.” This is the very essence of inclusion.

Problem solved? Hardly. While I’m an eternal optimist, I’m also pragmatic. There is obviously much more to unpack with this definition of Respect and there are many roadblocks that get in the way of practicing it, both individually and societally. Even so, I believe that it is a powerful process and tool that is greatly underutilized at a time when we need it the most. 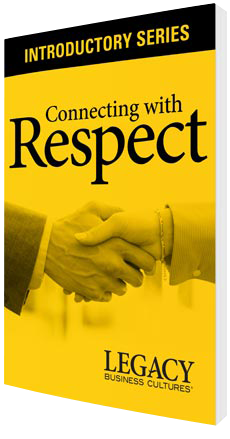 Sign up for the free “12 Rules of Respect” email series from our Connecting With Respect curriculum. You will learn 12 simple and effective guidelines to get your organization’s culture started down the path towards more respectful communication and engagement.