In the first part of our interview with Lynn Taylor, author of Tame Your Terrible Office Tyrant™ – TOT: How to Manage Childish Behavior and Thrive in Your Job (John Wiley & Sons), she offered us insights into managing up, TOT-proofing your organization and how all of this can also benefit bosses.

Below, Lynn shares more advice for dealing with childish bosses and concludes with an inspiring successful managing up scenario.

RW: In your book, you mention creating a “humanized workplace.” Could you please describe for our readers what that would look like?

LT: In today’s high-tech environment, sometimes “humanity” can be forgotten. A humanized workplace is a collaborative work environment in which everyone puts the larger good of the company first. It is the reverse of a corporate playground rampant with TOTs. It’s a workplace that has a family feeling to it, where fun and humor are not just tolerated, but encouraged. Where teams are inspired by their leaders to innovate and work toward a common goal. It’s a place where people want to work, not a corporate playground.

RW: Why is it so important to tame these TOTs? How are they wreaking havoc on the workplace?

LT: When TOTs run the workplace, workers don’t stay around for very long. Motivation, productivity and the company’s reputation drops along with profits. In fact, a survey commissioned by my company Lynn Taylor Consulting found that U.S. employees spend 19.2 hours a week (13 hours during the work week and 6.2 hours on the weekend) worrying about “what a boss says or does.”

The study illustrates the tremendous drain that a manager’s words and actions have on employees. Absenteeism, turnover, retraining and poor word of mouth, are just some of the ramifications. It reduces the opportunity to find and keep the best talent, not to mention the impact on customer acquisition and retention.

RW: If you had to choose, what would you consider the most detrimental TOT behavior that needs to be changed by bosses?

LT: Bullying. It seems to be a widespread problem, not only in corporate America but in schoolyards as well. The schoolyard bullies grow up to be boss bullies. Often a negative management style can be role modeled by more junior members of an organization until management training stops the practice early enough in its tracks.

TOTs don’t leave juice stains on the carpet hallways, so management and HR must look for early warning signs. An ounce of prevention is worth a pound of cure when it comes to bad behavior. My book focuses on behavior that is most common, irritating and not typically lawsuit worthy, but still, saps productivity of employees as well as management.

RW: What kind of advice would give to the employee of a TOT that refuses to be tamed?

LT: If your manager is intentionally malicious, that’s a matter that requires more serious action. If, after repeated efforts for cooperation (such as with a bully boss and unsupportive management), employees may be best served looking elsewhere. They must determine how much strife is manageable. As an employee, you should take pride in your work – and spend as much time enjoying your dream job.

RW: Give us an example of a successful managing up of a TOT and how it benefited the employees and the company.

LT: Ryan worked for an elusive TOT who ignored him for reasons Ryan couldn’t fathom. He would e-mail her with an important question and rarely get a response. However, she would drop by his office to tell him nonstop about her own projects, then leave. When he tried asking about his own projects, he couldn’t get a word in edgewise. Ryan worried about his boss’s behavior. Was she angry; was there going to be a layoff; was his work not up to par?

Although nonassertive by nature, Ryan decided to take action and manage up. When his boss came around to talk, he rolled his chair around his desk and sat next to her with a crucial report in his hand on which he needed her feedback, effectively blocking the doorway. When Ryan brought up the report, she tried to make her exit, but was boxed in. Ryan got to ask his question because she realized that there was give and take involved, even if it meant through Ryan’s non-verbal skills.

Ryan also learned that he had to catch her when she was available (often doling out projects) if he needed her attention. He’s been proactive ever since by getting his materials together for a moment’s notice visit; making his needs more concise, and posing most everything into a “yes” or “no” question.

The result? His questions get answered, his work runs more smoothly and she tells him he’s doing a great job. Ryan’s approval worries have subsided and his projects have become more streamlined.

RW: Many Thanks Lynn! 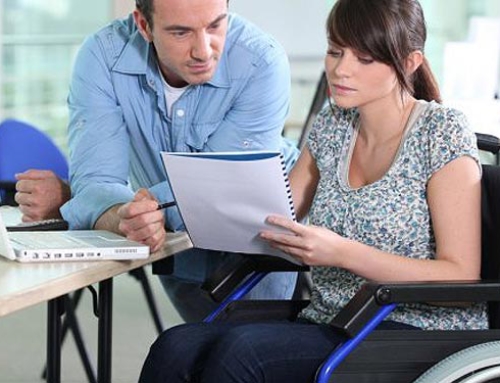 Respectful Communication and the Disabled: An Interview

Interview with Lynn Taylor: Part I